Greyhound Rescue & Adoption - Utah Chapter
"He will be your friend, you will be his LIFE!" 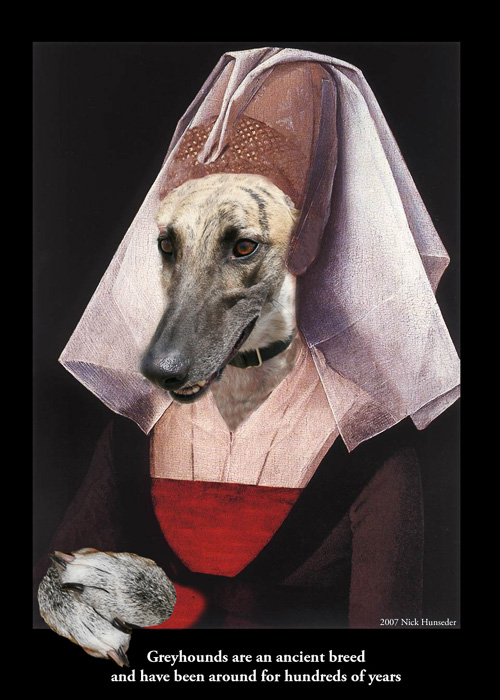 Wouldn't you like to honestly tell your friends that you have royal blood in your family? You can if you adopt a Greyhound. The Greyhound is an ancient as the desert from which it sprung. For thousands of years they were the dog of choice by kings, queens, pharaohs, sheiks, and people of distinction. In early Arabian culture, the birth of a Greyhound was cause of great celebrations and second only in importance to the birth of a son. They were the only dogs permitted to share an Arab's tent or ride atop his camel. They were also the only dog mentioned by name in the King James Version of the Bible (Proverbs 30:29-31).

To be presented with a Greyhound was considered the most prized gift one could receive. Persians believed that the Greyhound was permitted in the next world to give information and evidence about mankind. It was the Egyptians who first raced Greyhounds for sport in open fields with the wild hare as quarry and no rules of the game except speed. In the Early Kingdom, Greyhounds were considered to possess divine powers. During the 15th century, commoners were beheaded if caught with a Greyhound in their possession, so the sport of coursing (racing) could remain an elite activity shared only by nobility. When common men were finally allowed to own Greyhounds, the dog's toes were broken so they could not be used for racing. The destruction of a Greyhound was an extremely serious crime. In the 16th century, Queen Elizabeth established the beginning of formalized dog racing, dubbed the "Sport of Queens". The first track to open in the United States was in California in 1920.

These fleet-footed hounds are sight hounds. They can spot a moving object up to half a mile away. Their sprinting ability enables them to expend an enormous amount of energy in a short amount of time. They run at their fastest between 40 and 45 mph, making them the second fastest animal on Earth. Their ability to blend speed, coordination and strategy has made them great hunters as well as racers. Like a forest of trees, Greyhounds are one of the earth's valued treasures.